What Could Cause THOUSANDS of Drywall Screw Pops?

A perfect storm of missteps causes an unimaginable 'texture'—or did it?

One of my favorite magazine ads is of a drywall contractor standing in front of a couple who are his customers. He is gesturing toward a white painted wall that is completely bare. The caption reads: 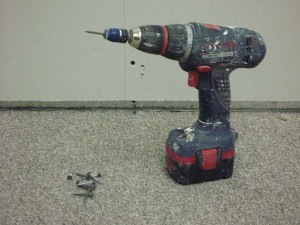 A general contractor recently asked me about some 'art' that he had commissioned. The house is finished and the people had been living there for a few months. He does not remember anything unusual during the drywall process, but now, there are now thousands of screw pops.

Let me put that in context for a minute.

It takes about 46 screws to attach a 12-foot piece of drywall to a wall, and 54 to put it on a ceiling. The amount of drywall that a crew can hang in a day varies because of the crew’s ability, the number of hangers in the crew and the type of job, but—my crews can typically hang 4,000 to 5,000 square feet per day, which requires about 4,700 screws. That is roughly 1,000 screws per 1,000 square feet of drywall.

It is not uncommon to have a dozen screw pops out of the 25,000 — 35,000 screws in an average house. Most of these are discovered and corrected by the tapers before the job is finished. After a full year cycle of seasons and wood movement, a few more screws may pop, and the owners usually ignore them until it is time to paint the walls again.

Screw pops are not usually a problem. Thousands of screw pops is a serious problem.

If that many screw pops were simply the result of poor workmanship, then it is hard to believe that no one noticed it as the work was being done. In many parts of the country, the drywall is inspected before taping can begin.

The problem would have been seen at that time. The GC and the owner of the drywall company should also have caught the problem in day-to-day jobsite visits.

There are no two ways about it: a screw is either set right or it is set wrong

A screw that is set too far out is obvious and cannot be concealed unless you build up the compound and create a bump. Those are easy to spot and easy to fix.

Screws that are set too far in, are much more difficult to spot. A slight difference in a screw depth makes a big difference because the paper facing is—paper thin. Literally.

In the photo, the lower screw is set a little too deep and is more likely to pop than the upper screw.

Usually an occasional screw set too deep will not be a problem. The screw is still holding the drywall tight and other screws in the area also hold the drywall tight. The slightly-deep screw may not show up when sanding and may never show up as a pop, but it is a weak attachment and is more likely to pop during structural movement or impact on the wall or ceiling.

The contractor with the screw pop issue told me that everywhere he pushed on the drywall caused screw pops.

This indicated that the drywall was not tight to the framing. But how?

This is hard to believe, too.

Maybe the drywall was not tight to the framing because insulation pushed against it; the screw was set and the panel was finished without showing up as being loose. Until it was.

But the pops were everywhere, even on un-insulated walls, so that kind of rules out the insulation culprit.

Maybe the screws were too long? The screw should penetrate the wood about 5/8 inch to 3/4 inch. That means the 1-1/4 inch screws that are most commonly used for attaching 1/2 inch and 5/8 inch drywall are exactly right. Go figure.

Longer screws are harder to drive straight, so they are not a better choice. A crooked screw will tear the paper on one side and be proud of the paper on the other.

And when the framing shrinks, a longer screw is more likely to pop because the angular movement is more extreme at the ends of the screw.

How I install drywall so that my screws do not pop

Personally, I do not have a problem with screw pops, because, well, I am That Drywall Guy, and my screws do not pop. I have had a couple of occasions—long ago—where I had a couple of hundred screw pops. I have since refined my anti-pop drywall method. Here's five tips:

If you have screw pops that you need to repair:

Tighten the screw with a screwdriver or add another screw next to the one that popped. Sometimes the popped screw may need to be removed.

After re-coating with compound and sanding, the areas will all have to be primed and painted. If paint with a sheen was used (something other than flat), then the entire surface may have to be painted again to hide the repair.

So what caused the thousands of screw pops?

Since it is so uncommon to get that many pops, something unusual had to have happened. It’s a pretty safe bet that some sort of shrinkage occurred, but it seems likely that it was a combination of many factors that compounded the problem. Kind of an all-of-the-above thing.

The  system can overcome one or two bad conditions, and still work with minimal pops, but with three or four contributing factors, the home was doomed.

I think the lumber had higher than normal moisture content, the drywall had a somewhat soft core (perhaps it got damp while it was stocked), the screws were set poorly, maybe they were too long, and the PVA (polyvinyl acetate) paint that was applied to the wall trapped the moisture.

More info from the crowd:

Since first writing about this, I have gotten a lot of comments, questions, and potential perps. Eric, a drywall contractor in Michigan says this:

"Wood breathes, and glue shrinks. A giant glob of glue behind a screw will dry up, pulling the drywall closer to the stud thus pushing screws outward.

When I do ceilings, I use a tiny bead of glue and many screws making sure the drywall is tight to the wood.

And here's my foolproof way of doing walls: Use big globs of glue in the field to grab the drywall and give it a solid feel, but no screws in the field. Screw off the perimeter of the sheet where all screws get taped over or trimmed. You do not need them [in the field] because you are not fighting gravity like with ceilings.

Rudy Ruiz, a drywall contractor with 40 years experience, believes part of the problem is the lightweight drywall and latex adhesive. "Lightweight board," he says, "has too many air bubbles—in order to make it lightweight—so drywall screws are never really tight."

He also believes that latex adhesive is less tolerant of moisture and temperature changes. I have not experienced any problems with the lighter weight drywall, though It does seem to have a harder core which seems to give less when setting a screw.

Because the core of lightweight drywall is coarser, the paper tears more easily when setting the screw. But it is not significantly worse. You just have to be more careful when fastening and occasionally put in an extra screw next to one that was set too deep.

I also found some information about a recent rash of screw pops on USG's website:

In the last two to three years, USG has received a significant number of fastener-related drywall installation complaints in the Mid-Atlantic region (Virginia, Maryland, Pennsylvania, New Jersey and New York).

Numerous drywall contractors within this region have reported raised bumps over drywall screws occurring anywhere from a few days to several months after hanging and finishing the drywall ...

It seems that Rudy Ruiz was on to something. USG summarized the commonalities of the cases:

Some similarities to the case in question, and some differences, too—most of my friend's problems concentrated at edges.

Have you got anything to add to the screw pop perp list?

—This article first appeared on ThisIsDrywall, and was lightly edited in Dec/2019. The article was written by Myron Ferguson, aka That Drywall Guy, who points out on his website that over 80% of the visible interior of a home is covered with drywall, and "The bitterness of poor quality remains long after the sweetness of low price is forgotten."
Amen, brother. © Myron R. Ferguson 2014