Hanging Drywall Like this Can Make a House More Energy Efficient.

Drywall can be an air barrier

Airtightness and superinsulation are becoming mainstream construction topics where they used to be niche topics that no one talked about.

With blower door tests in the building code, it is up to more than just the insulators or the GC to deliver results: many trades have a stake. Turns out, it is easy f

or a drywall contractor to become involved in delivering building performance.

One way to create a more energy efficient building is to stop air leaks through the thermal envelope. Air leaks can carry moisture that could condense in walls or attics which then can cause hidden mold and rot.

Materials that stop air leaks are called air barriers and it is best to put them next to the insulation. Because drywall is frequently installed against insulation, it can be an effective air barrier.

To create a good air barrier, the drywall has to be attached to the framing in an airtight manner and all possible air leakage points around holes cut into the drywall have to be properly sealed.

The combination of the drywall, framing, caulks, and sealants make up the air barrier assembly. 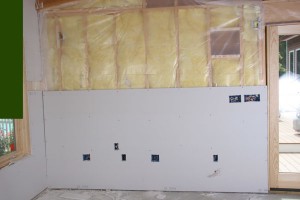 A sheet of drywall as a material is a good air barrier. But it is not often that a piece of drywall is hung that is not full of holes for electrical boxes, ductwork, windows, and doors. To tighten these holes, seal the electrical boxes and other protrusions before the drywall is hung.

You can seal holes in the boxes with caulking, but for a much tighter seal isolate the boxes.

Foam or clay products, like the Energy Block in the picture, can be used to form an airtight cover around electrical boxes.

Seal the foam box to the stud and then lay a bead of caulk on the perimeter face to seal against the back of the drywall.

Isolating protrusions in ceilings is even more important than in a wall because of the stack effect in a building.

The stack effect refers to the draft established in a building from air entering low and exiting high due to the difference in buoyancy between warm air and cold air.

Gluing drywall to studs is nothing new Adhesive is quite often used to eliminate fastener pops.

You can upgrade the process energy-wise by using adhesive to airseal the edges of the panels.

Instead of applying the adhesive to framing only along the center of the panels, also apply adhesive along the perimeter of each wall and window opening.

This will make all of the gaps between the drywall and framing, airtight.

Flexible caulking or an acoustical sealant is a better choice for the long term because of the flexibility and stretching characteristics.

Because but most drywall contactors already have a box full of adhesive tubes, it is likely that adhesive will be their first choice out of the convenience.

The important part is a continuous bead, about a 3/8-inch thick.

Where ceilings meet walls is a little more difficult to navigate

Because of the way ceilings are constructed it is difficult to seal the perimeter of the drywall with adhesive or caulking.

If the walls are properly sealed around the perimeter then air should not be able to find its way along the ceiling edges.

But, I believe in being extra thorough, so I seal the perimeter of the ceiling, too.  Where walls and ceilings intersect, I use expanding foam to seal the gaps.

This can be done from above in the unconditioned attic or from below after the ceiling is hung but before the walls are butted up to the ceilings.

We all need to be more energy conscious, and yes it does take extra time and attention-to-detail to properly air seal a building, but it is really a win-win situation.

The key point is that the architect, owner, builder, and subcontractors work together for a better building. When everyone is paddling in the same direction, the process is easy and rewarding.

—Myron Ferguson, aka That Drywall Guy, points out on his website that over 80 percent of the visible interior of a home is covered with drywall, and "The bitterness of poor quality remains long after the sweetness of low price is forgotten." This is an edited version of a blog at thisisdrywall.com