Q: Is Truss Uplift a Carpentry Problem or a Drywall Problem?

A: Neither. It's a physics problem. The solution lies in carpenters and drywall installers working together.

Trusses are a fast way to get a roof framed. They are often a less expensive than stick-framed roofs because they use smaller dimension lumber and they go up faster. And, trusses are flexible in accommodating different design needs, so they tend to be the darlings of designers.

Trusses have been around for a long time and so has their primary drawback: truss uplift.

Truss uplift is not structural problem, it's a cosmetic problem caused by temperature differential

When a newer house shows signs of interior cracking at the ceiling of the top floor in the winter, this can normally be associated with truss uplift. Roof truss uplift occurs when the bottom chord of the truss is exposed to significantly different moisture and/or temperature conditions than the rest of the roof truss. Because the bottom chord of the truss is buried in heavy insulation, it experiences different conditions than the top chord.

When moist air from the inside escapes into a cold attic, the moisture condenses on the trusses and roof deck. If the temperature is below 32, it also freezes. When the temperature rises above 32F, the moisture soaks into the wood. The dampness causes the top chords to expand relative to the bottom chord, which was warm and dry all winter.

This differential movement between top and bottom chords causes an arch in the center. Because the

truss ends are secured to exterior walls, (a location that resists outward thrust), as the bottom chord expands, the force pushes it upward into the attic space.

This movement can cause a simple hairline crack or it can create large gaps along the corners, but it is a cosmetic problem mostly occurring in homes in cold climates. 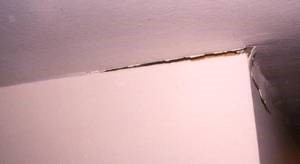 ypically open in the winter and close in the summer. As a result the problem is often an ongoing one. The building contractor is held responsible, who calls the drywall contractor to re-tape the corners and un-pop the popped screws.

And then the same thing happens next year.

You can't stop truss uplift, but you can stop the cracks that result

Most truss movement occurs over a period of time, so to prevent cracks, you must allow the drywall to flex near the corners.

Some of these solutions are more difficult (and therefore more costly) than others.

1. Disconnect the tops of the interior walls from the trusses.

2. Install crown molding around all the second floor ceilings, nailing the trim only to the ceilings.

3. Change the way the attic is insulated—another costly and invasive approach

How to prevent the problem in new construction

The key to preventing truss uplift cracks and screw pops in the first place is to avoid nailing or screwing the ceiling drywall to the bottom of the trusses at or near the intersection. When building a new house, the framing contractor should secure the interior partitions to the trusses with truss clips. The clips attach to the tops of the interior wall partitions and are then fastened through the slots to the trusses.

The clip fasteners are not driven tight, which allows the truss to move without pulling on the wall. This keeps the partition wall stable and plumb and secures the rafters at the proper on-center spacing.

To prevent cracking of the drywall, the drywaller contractor should float the corners between ceiling and wall. Do not screw or nail the drywall to the trusses within 16 inches of an interior wall and within 8 inches of the ceilings on the exterior walls.

Instead, fasten the ceiling drywall panel to blocks of wood nailed to the top plates of the wall (not to the trusses) or to metal clips or continuous angles that are attached along the tops of the interior walls.

The truss will still arch, but the movement is gradual, so the drywall can flex slowly. As the rafter moves up, the drywall along the wall/ceiling intersection bends, but stays in place and doesn't crack.

Use a Truss Backing Angle

Trim-Tex has a product called a Truss Backing Angle which is installed before the drywall is hung and helps prevent truss uplift. 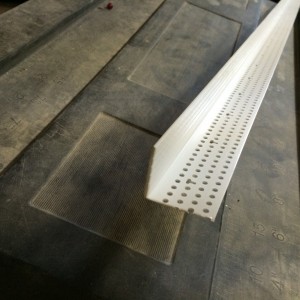 The idea is not really new; Trim-Tex is just trying to offer a better alternative. The backing angle is made out of vinyl, which is strong enough to hold the drywall edge in place along the top edge of the wall. It is attached the entire length of the walls being treated. 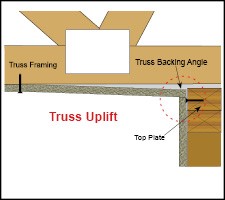 This means that the drywall is backed for its entire length and can easily be fastened anywhere along the edge as long as the fasteners don’t go through the angle and into the truss. The screws start very easily in the vinyl engineered extrusions which speeds up production.

—This is a lightly edited version of the article "Truss Uplift Cause and Solutions,"which first appeared on ThisIsDrywall. It was written by Myron Ferguson, aka That Drywall Guy, who points out on his website that over 80% of the visible interior of a home is covered with drywall, and "The bitterness of poor quality remains long after the sweetness of low price is forgotten."
Amen, brother.